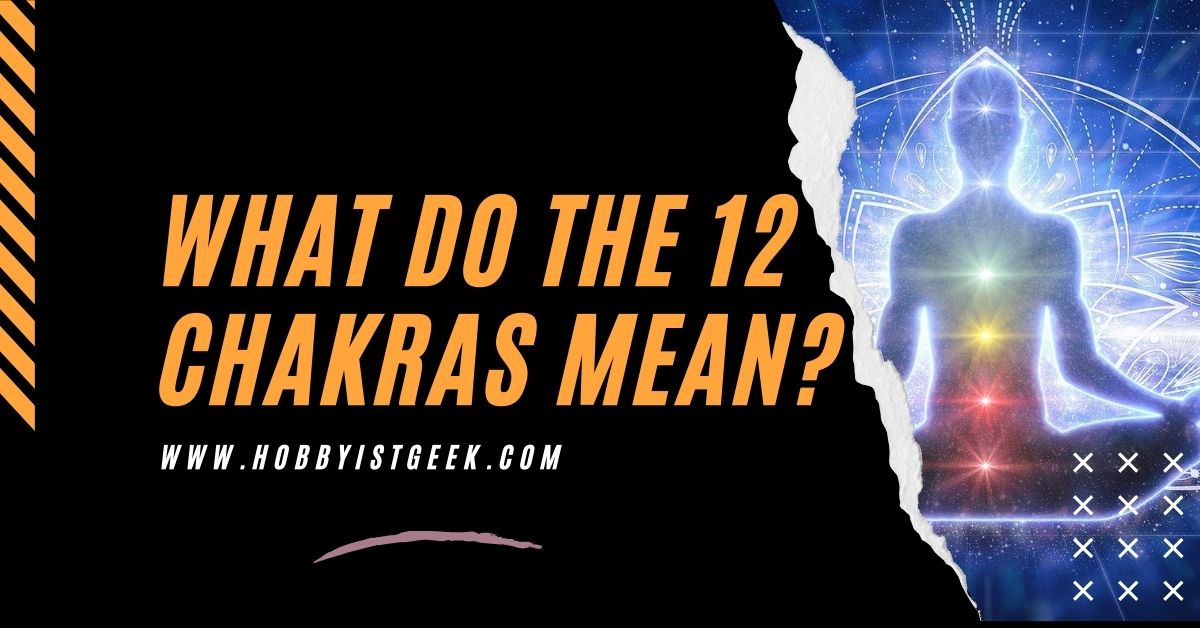 What Do The 12 Chakras Mean? I will be going into great detail in this article all about the 12 Chakras.

Have you been feeling down lately? Or perhaps very happy?

Whatever it may be, it could be due to one of your Chakras!

You might have heard of the Chakra system before but in this article, we’ll take a dive into the world of these interesting spiritual beliefs!

Chakras can be seen as energy points in the body that need to stay aligned and open in order to preserve well-being.

Chakras are located on different parts of your body and are associated with functions and colors.

In this article, we’ll take a look at the advanced 12 chakra system! So, without further ado, let’s jump straight into it!

What Is The 12 Chakra System?

The original 7 Chakra system depicts several energy points running through your body from the spine up to the crown.

It is an ancient spiritual belief system that is said to control both your mental and physical well-being.

The 12 Chakra system is the more advanced and modern depiction of the system.

Though still controversial, the 12 Chakra system is generally represented as the 7 base Chakras plus 5 more located outside of your body!

We will now look at all of the 12 Chakra’s on an individual basis, starting with the 7 base Chakras before moving on to the 5 extra ones to form the 12 Chakra system!

Chakra 1 is also known as the root chakra and it is located at the very base of the spine, near the tailbone. The Root Chakra is represented by the color red.

This chakra is incredibly important for our physical wellbeing, as a blocked root Chakra can cause things like arthritis or constipation.

If this Chakra is blocked, you will experience many insecurities. An open and aligned root Chakra is vital to feeling secure and grounded in life.

Chakra 2, or the orange Chakra, is also known as the Sacred Chakra. It is located just below the belly button and just above the pubic bone.

Our Sacred Chakra is connected to sexuality and creativity, if it is well aligned and opened we will feel self-worthy, especially around sexuality, creativity, and pleasure.

In terms of physical limitations, a blocked Chakra 2 can cause pain in the area of its location, such as lower back pain or urinary tract infections.

Chakra 3 has been assigned the color yellow and it is located in the upper abdomen, close to the stomach. It’s known as the Solar Plexus Chakra.

A blockage in Chakra 3 can manifest digestive issues or eating disorders.

This Chakra is associated with our self-esteem and confidence and is, therefore, better known as our Chakra of personal power!

An opened and aligned Solar Plexus Chakra will result in a confidence boost.

The Green Chakra is the fourth of the seven standard Chakra’s and it is located just above the center of the heart. It is also known as the Heart Chakra.

Blocks in the Heart Chakra can lead to heart or weight problems.

When your Heart Chakra is blocked you will become lonely and insecure, putting others first to your own detriment.

If it is aligned, you’ll feel loved, and you’ll improve at loving others. The Heart Chakra is the middle Chakra and therefore divides the bottom from the top Chakras.

Chakra 5 is also known as the throat chakra and it is associated with the color Blue. As you can imagine, the Throat Chakra is located in the throat.

This Chakra deals with our ability to communicate, a blockage can be detected through throat and voice problems or a substantial amount of gossiping or speaking before you think.

When it is aligned you will speak the truth with confidence!

The sixth Chakra has the color Indigo and is also known as the third eye or the brow Chakra. It is located between the eyes in the head.

The third eye Chakra has to do with our imagination and intuition. A blocked Chakra 6 can cause headaches or sight problems.

If it is well aligned you will follow your intuition and see the bigger picture.

Chakra 7 is the final Chakra in the original system and it is also known as the crown chakra. It has a violet color and is located right at the top of our head.

The crown chakra has to do with our mind and intelligence, and it is connected with every other chakra in our body.

A blocked chakra can cause many issues throughout the body and it can result in a stubborn, fixed mindset. When it is opened and aligned you will feel enlightened!

Chakra 8 is the color Magenta and it is also known as the soul star chakra. It is located around 60 centimeters around the crown chakra.

Chakra 8 holds information on things like your karmic pattern and soul contract throughout your incarnations.

It is the lessons we need to learn to enhance our souls and it will only open up when we face the bigger scheme of eternity.

The 9th Chakra has a pink color and is located 122 cm above the head. It is also known as the spirit Chakra.

The spirit Chakra holds the key to the soul’s destiny and it stores all the skills we have learned throughout our many lifetimes.

The Universal Chakra is where all of our skills start to manifest, we start to excel at the skills we have learned throughout our lifetimes here.

Chakra 11 is also known as the Galactic Chakra. It is located somewhere above the Universal Chakra and has the color Gold.

This is where we get in touch with the divine. We can see glimpses of other dimensions and we start to develop the ability to travel outside of the boundaries of time and space.

The last Chakra in the system is Silver and is also known as the divine gateway Chakra. Its position is somewhere above the Galactic Chakra.

This is our connection to the masculine divine. It has to do with our ability to create and change in all dimensions!

Final Thoughts On… What Do The 12 Chakras Mean?

The 12 Chakra system is an interesting system with many great applications.

We have looked at all the Chakra’s in our body and we hope that this article has helped you understand this beautiful piece of spirituality! Thank you for reading!

If you liked the information in this article “What Do The 12 Chakras Mean?” you will love reading Chakra Stones And How To Use Them.

We will now cover some frequently asked questions on the 12 chakra system!

What is the 7 chakra system?

Are the Chakra’s physical objects?

No, they are spiritual and are often represented as discs or wheels, they exist in certain places of the body but not physically.

How can I open and align my Chakra’s?

Each Chakra has an individual treatment method to be opened and aligned, many of these can be found online.

How do I know if one of my Chakra’s is blocked?

Check to see if any of the symptoms you have match those mentioned in the article, if so, chances are you have a blocked chakra!

Chakras have plenty of scientific proof behind them, it is not 100% proven yet, but there are plenty of studies that show the value of Chakras!

LizzyLizzy is editor-in-chief of Chakra Magazine and chakras.info. She is trained in several energy healing modalities including Reiki and Healing Touch. In addition, she has spent many years studying ancient traditions such as the chakra system and Tibeta. “Understanding the 12 Chakras and What They Mean.” Chakras.info, 4 Dec. 2019, www.chakras.info/12-chakras/. 25 Interesting Facts About Crystals (Part One) Are Crystals Rocks? (Explained) What’s a rock and a crystal? A rock is a solid mineral material found on the surface of the Earth and other comparable planets, either exposed or buried beneath the soil or oceans. Crystals are stunning rock formations that have awed people for millennia. Not only are they utilized for decoration,…

What Does The Third Eye Chakra Mean? will be covered in this informative article. Chakras are an incredibly interesting spiritual system with many ins and outs and a lot for us to learn about. We have been looking into Chakras and some of them are simply more fascinating than others. In this article, we’ll be… What Do Chakra Colors Represent? will be the topic I will be explaining I hope you find it filled with lots of useful information. The chakra colors represent the body’s primary energy centers, indicating our emotional, spiritual, and physical perspectives. In humans, the spine is made of the seven chakras believed to be energy wheels….

What Does A Blue Evil Eye Bracelet Mean? Is the topic for today please enjoy… Introduction We are now more than ever exposed to low vibrations. Finding a method to guard the energy field that serves us is as vital as healing work or meditation in spiritual self-care. You can employ spiritual signs and evil eye…